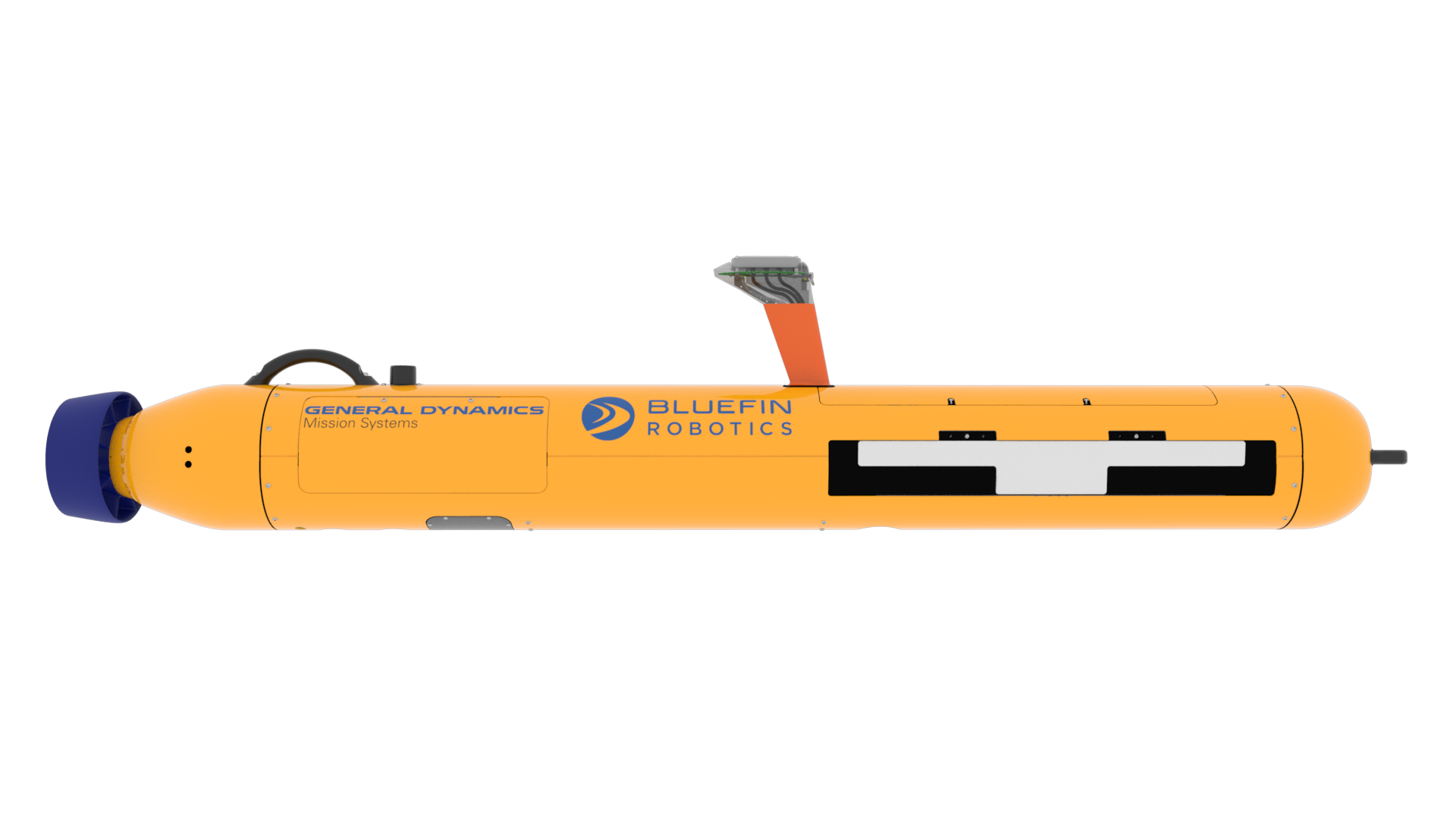 MOST POWERFUL SENSOR PACKAGE IN A TWO-MAN PORTABLE UUV

The Sonardyne Solstice MAS enables operators to view their data in 3D. Bathymetric data and side scan imagery can be viewed in the same instance to produce detailed digital terrain maps. 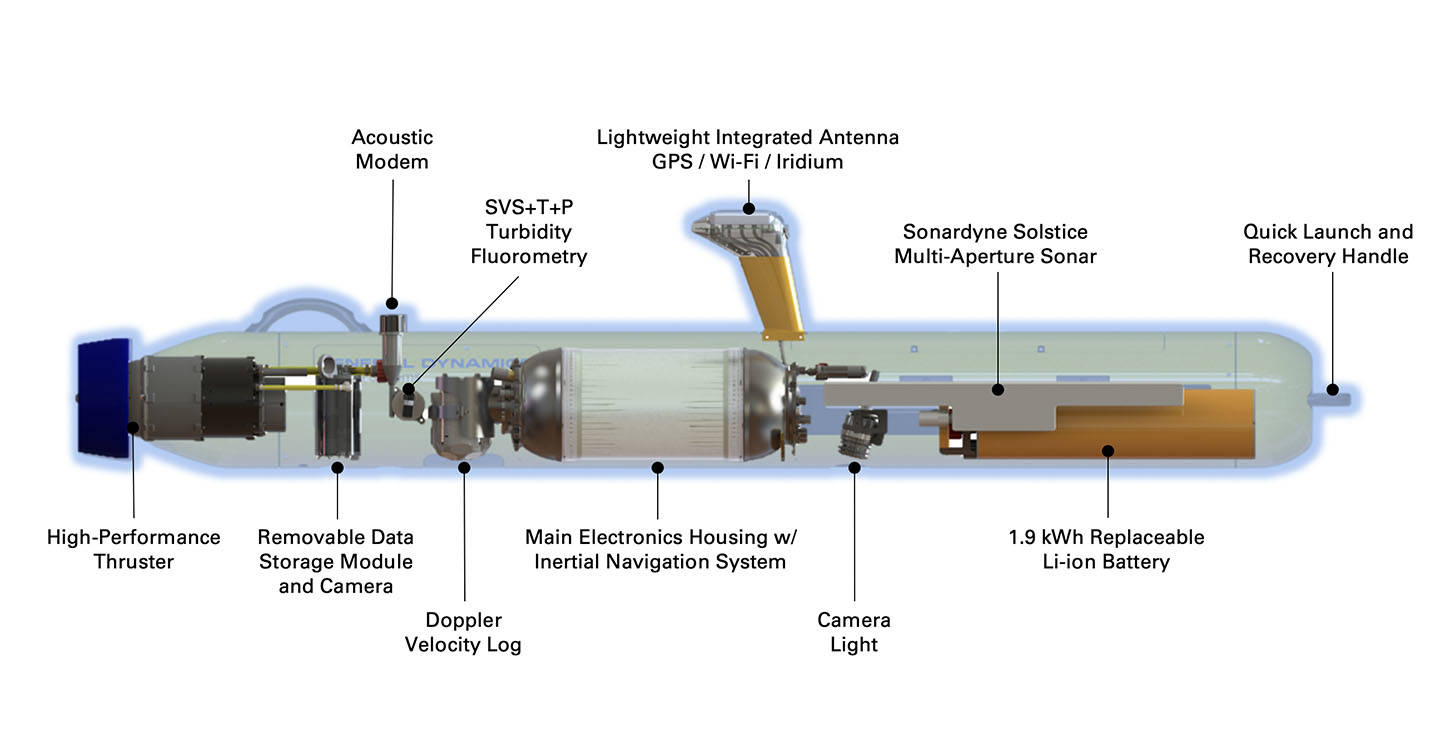 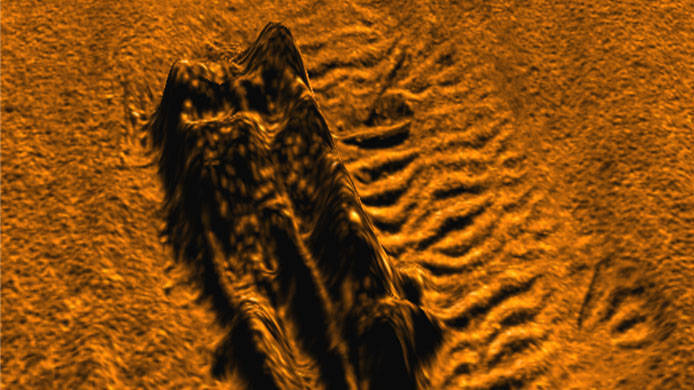 A 3D-image of shipwreck in Boston Harbor captured by a Bluefin-9 UUV. 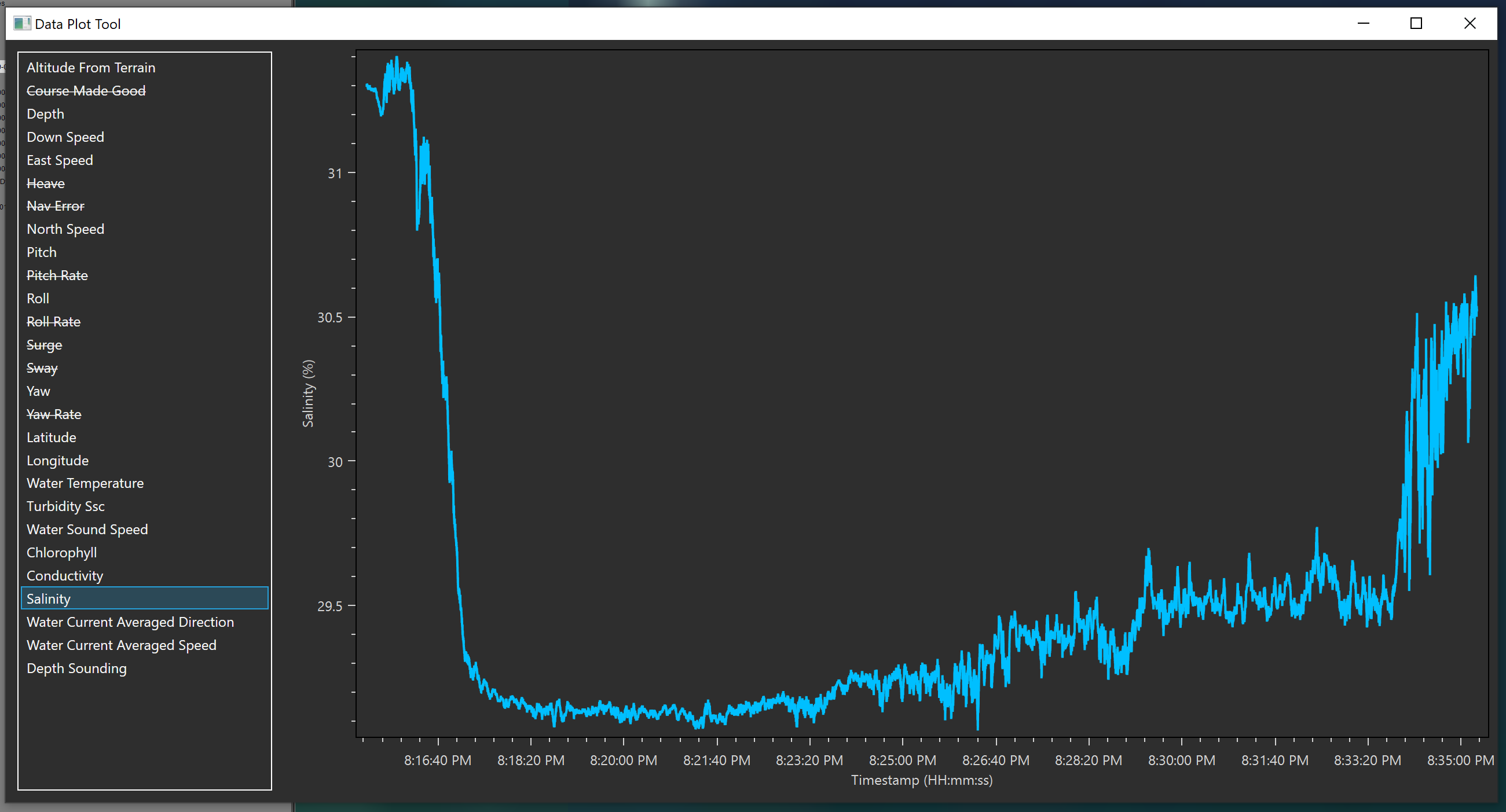 A Salinity Plot example from the Bluefin-9's environmental sensing suite.

The Nortek Doppler Velocity Log (DVL) on the Bluefin-9 is capable of calculating the water current direction and speed near the vehicle, like an Acoustic Doppler Current Profiler (ADCP). The DVL on the Bluefin-9 collects and provides current profiles extending from the vehicle to the seafloor, or to maximum range of the DVL.

The removable 1.9 kWh Li-ion battery can be easily accessed, removed and replaced in-field in minutes. The battery provides 8 hours of in-water operation, and is fully recharged in 6 hours. The batteries, common across numerous Bluefin UUVs, are also shippable under UN 38.3. 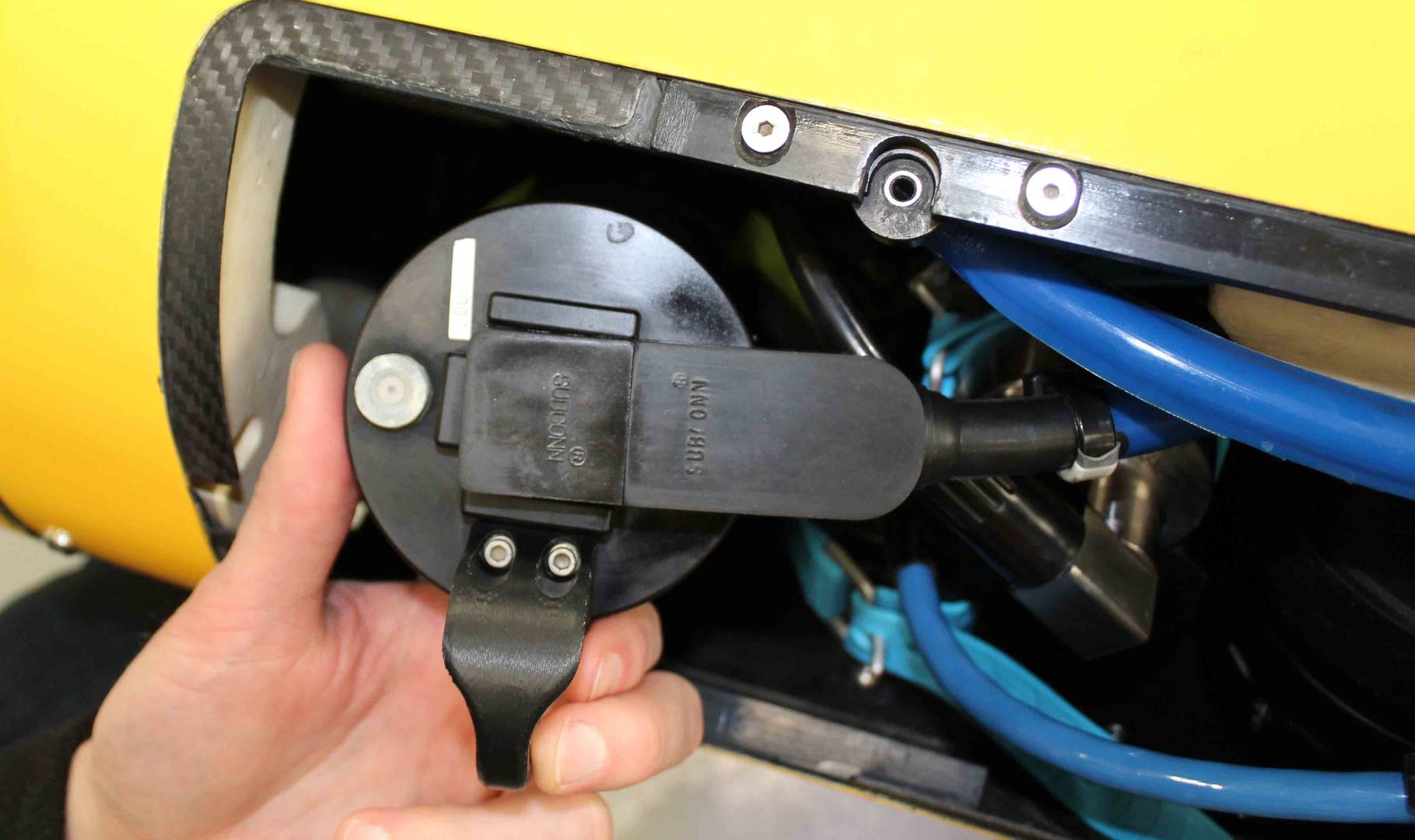 The Removable Data Storage Module (RDSM) is a field-swappable module that processes and stores data collected by integrated sonar, camera and environmental sensors. An operator is able to recover and redeploy their vehicle in 30 minutes or less and have reviewable or actionable data in-hand immediately.  Bluefin-9’s RDSM acts as an independent data processor, generating and storing post-processed data with a simple interface to an operator’s workstation. The RDSM contains a high-definition, machine-vision-grade monochrome camera that captures still images and video. Imagery is geotagged for easy review during post-mission analysis.

The Seafloor Optical Camera is optimized for low-light operation and captures still images at up to 3.2 megapixels or Full High-definition video. The monochrome camera delivers lower noise and higher overall image quality in a low-light subsea environment. Lighting provided by an LED floodlight can be turned on and off for relevant portions of a mission. All captured images are time-referenced for post-mission processing and analysis.

The vehicles integrate visible LED strobe lights and a radio direction finder (RDF) beacon that aid in recovery of the vehicle when it is on the surface. While the vehicle is underwater, including while it is in the emergency mode, the vehicle’s range can be computed by pinging the acoustic modem.

Bluefin-9 monitors its own performance while on mission through the use of environmental sensors inside of the pressure vessels that measure the pressure, humidity and temperature, while also monitoring for leaks, to ensure that problems can be remedied before damage occurs from environmental effects. This information is relayed in real-time to the operator to monitor during the mission.

Our Operator Tool Suite is a comprehensive UUV software package that provides the interface between the UUV and the operator for all mission phases. The simple user interface maximizes the operator’s effectiveness in UUV operations. This Windows-based tool suite includes everything necessary to run and manage the system, including vehicle check-out and testing, mission planning, vehicle communications, mission monitoring and execution, data management, and post-mission analysis. 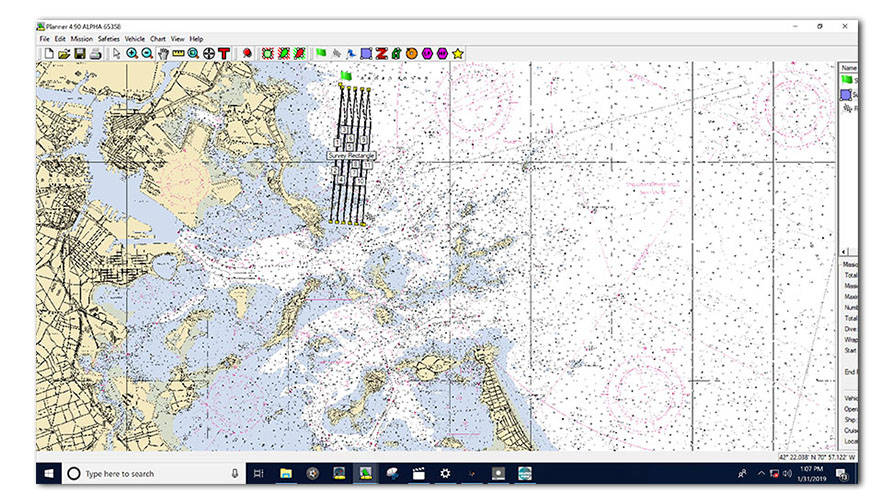 Mission Planning and Verification
From within this graphical tool, basic missions are easy to enter and verify, while complex mission plans can be built up from basic survey “widgets.” Mission and safety details are fully accessible, allowing for rapid and accurate mission planning. Planning takes place on top of a chart-based view which accepts raster or digital charts. Operators can specify safety settings, operational constraints, recovery points and return plans. The Mission Planner also allows customer-specific commands to be sent via the Standard Payload Interface.

The Bluefin-9 fully supports SeeByte’s SeeTrack 4, which allows the user to graphically plan missions on nautical charts and specify operational and safety limits, recovery points and return plans. SeeTrack can display previously collected mission data that allows the user to plan the next mission with full situational awareness. External data sources can easily be imported from a variety of standard formats, including DNC, ENC S-57, ENC S-63, ESRI ShapeFiles and GeoTiff. Additional third-party mission management software can be integrated across the family of Bluefin UUVs. 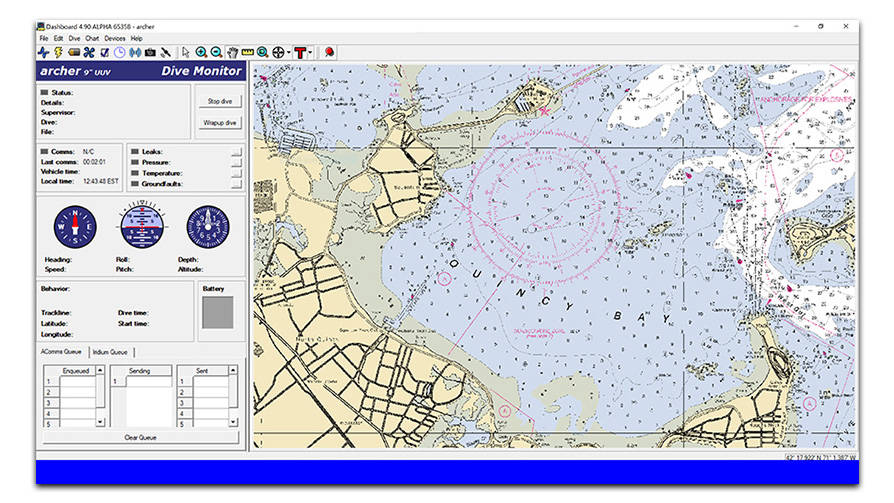 Vehicle Testing, Checkout and Mission Monitoring
Dashboard tools enable the operator to track vehicles against a chart-based interface which includes ship position indicators, mission plans, and a variety of operator-specified annotations. Vehicle status is readily apparent, including the current behavior as well as details of vehicle status. The Dashboard automatically shifts communications to the highest bandwidth channel available providing you with a dynamic gateway to the vehicle. A variety of specialized diagnostic interfaces aid the preventative and corrective maintenance procedures for each sensor and subsystem. 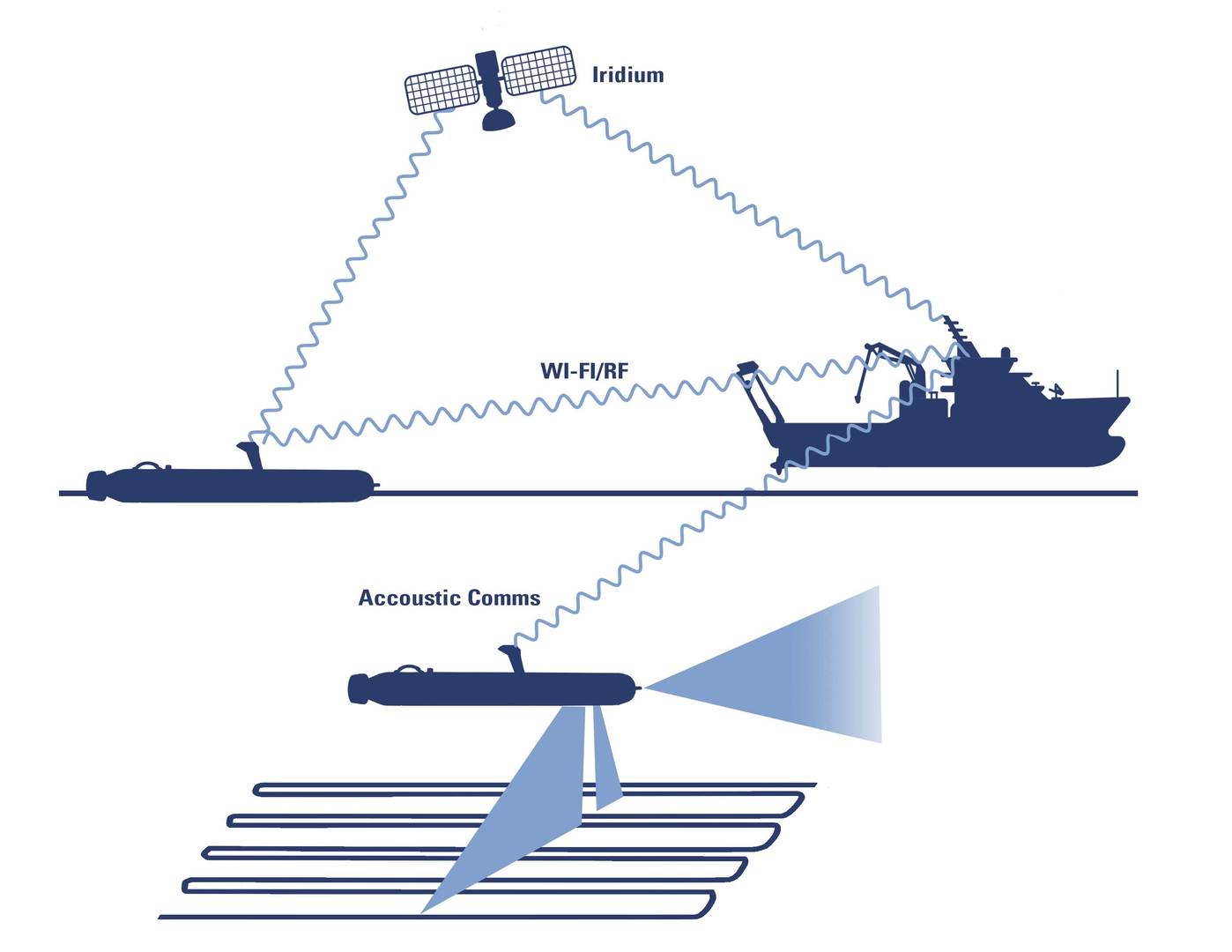 Bluefin TOPICS reports detailed mission status while on a dive, including the status of the vehicle’s subsystems, payload health and data collected. Vehicle position is also plotted on the Bluefin Dashboard chart. 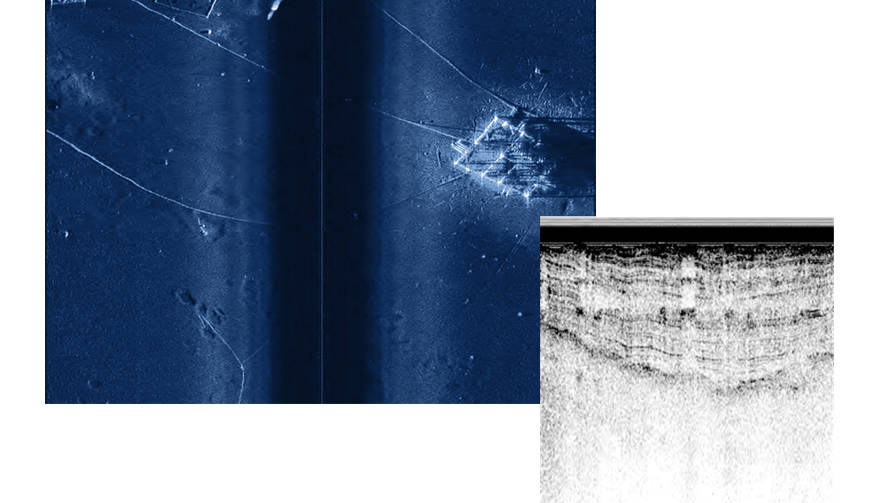 Bluefin Witness processes payload data in real time onboard the UUV, compresses the imagery and sends it to operators via the acoustic communication link throughout a mission.

Training material is provided for each student. Extended, on-site and custom training courses are also available. General Dynamics Mission Systems can also run “train-the-trainer” courses, which enable customers to train their own personnel.