Launched in 1977, NASA’s twin spacecraft, Voyager I and Voyager II are exploring where no human made object has ever flown before. The initial goal of the Voyager mission was a 12-year effort to explore Jupiter and Saturn, but due to the success of the spacecraft and a planetary alignment that occurs about every 175 years, it has been extended for the last 40 years to explore Uranus and Neptune and even to the outermost edge of the Sun’s domain, and beyond.

In the early 1970’s General Dynamics Mission Systems (formerly Motorola’s Government Electronic Division) was selected by NASA’s Jet Propulsion Laboratory to produce the communications subsystem, which was installed on board both the Voyager I and II Spacecraft.

Space communications equipment built by our engineers more than four decades ago continues to provide the critical communications link connecting Voyager to Earth and allowing scientists to receive this first-ever interstellar data.

The Voyager 1 spacecraft acquired a total of 60 frames for a mosaic of the solar system from a distance of more than 4 billion miles from Earth and about 32 degrees above the ecliptic. This first ever ‘family portrait’ of the solar system was transmitted back to earth via General Dynamics' communications equipment in the early ‘90s right before the cameras aboard the spacecraft were turned off. (Photo Credit: NASA)

Larry Brown served as General Dynamics' engineering project manager for the Voyager’s communications equipment in the 1970's. In an interview with Larry back in 2006, he pointed out “Our radio technology continues to provide the only communications link between the Voyager spacecraft and Earth. Without our equipment, we wouldn’t know nearly as much about our solar system.”

The General Dynamics engineering team provided the onboard radio equipment for the Voyager spacecraft, the link between the spacecraft and Earth. Specifically, the Radio Frequency Subsystem (RFS) enabled two-way communications between Earth and the spacecraft. The RFS has transmitted pictures of all the planets Voyager has visited and continues to send back engineering and scientific data. It also receives commands from earth and forwards the signals to other onboard equipment.

In the Summer of 1989, Voyager 2 became the first spacecraft to observe Neptune. It was Neptune's north pole that Voyager 2 made its closest approach to any planet since leaving Earth. (Photo Credit: NASA)

In addition to the Radio Frequency Subsystem, our team also provided the Modulation/Demodulation Subsystem which includes the Command Detector Unit and the Telemetry Modulation Unit. The Command Detector Unit decodes signals coming from the on-board radio assembly and sends the message to other parts of the spacecraft. The Telemetry Modulation Unit receives data from equipment on the spacecraft and puts it into the proper format to send to the onboard radio assembly, which transmits the data back to Earth.

Due to the exceptional performance of the two-way radio communications equipment, the Voyager spacecraft have returned more information about the outer planets and the far fringes of our solar system than had existed in all of the preceding history of astronomy and planetary science.

Engineering a Communications System to Operate in Deep Space 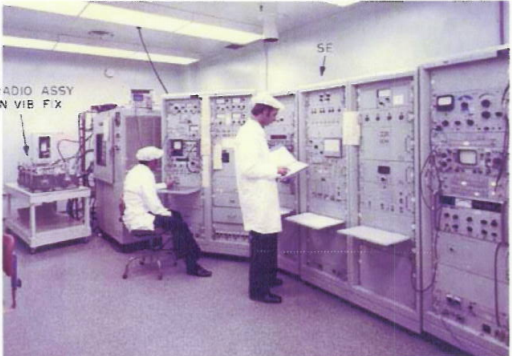 In this 1970’s photo, engineers test the Voyager radio assembly at a General Dynamics lab in Scottsdale, AZ.

Size was one of many challenges engineers faced when designing the Voyager communications subsystem. The radio assembly reciever, consisting of multiple subsystems, had to be relatively small in order for the mission to be successful. The S-Band Transponder had to be limited in size and weighed only eight pounds.

Another major challenge occurred when determining how to get signals across millions—let alone billions—of miles without consuming massive amounts of power. The radio frequency subsystem can pick up a signal from Earth that is infinitesimal—just .0000000000000000001 of a watt.  The answer? Make the receiver very sensitive and the ground transmitter very powerful.

When asked about the challenges of engineering the Voyager mission, Brown explained “Given the tools that engineers were working with in the ‘70s and the limitations of the relatively primitive technology, the performance of the Voyager has been phenomenal and the spacecraft continues to communicate with Earth every day, sending and receiving signals through the Deep Space Network.”

NASA's Deep Space Network is the largest and most sensitive scientific telecommunications system on Earth using an international collection of antennas that send and recieve radio signals to distant spacecraft, including Voyager. Each radio signal from Voyager travels at the speed of light, taking aproximately 17 hours to reach the Deep Space Network antennas on Earth.

Transmitting Data from Space for the Last 40 Years

Once the Voyagers were launched into the harsh conditions of space, they still needed to operate reliably. Engineers would not be able to fix hardware problems that occurred because the spacecrafts would be millions of miles away. If the radios failed, there would be no data, no science. The lifetime of these radios has long surpassed their original 12 year life expectancy as data is still collected today, 40 years post launch.

Two-way communications will be maintained until the Voyagers’ nuclear power sources can no longer supply enough electrical energy to power critical subsystems. According to NASA, Voyager I and II boast enough power and communications capability to keep radioing back to earth into 2020.

Due to the benign environment once they have entered interstellar space, it is expected that the Voyager Spacecraft will be almost the same a billion years from now.  Of course they will not be operating in a billion years, but if a future interstellar space traveler comes upon one of them, the spacecraft can serve in another capacity—as planetary ambassadors. Each Voyager Spacecraft carries a 12-inch gold-plated copper disk containing sounds and images selected to portray the culture and diversity of Earth. Plus, each craft holds six aluminum plates that contain the signatures of most of the people who worked on the program, including Larry Brown.

The signatures of Voyager personnel printed on a six aluminum plates and placed aboard both Voyager spacecraft. General Dynamics employee Larry Brown's signature is included on board.

Each Voyager spacecraft carries a small American flag and a Golden Record packed with pictures and sounds as mementos of our home planet. (Photo Credit: NASA)

Brown added, “The radios we developed for Voyager were state-of-the-art at the time, but no longer. Technology evolves quickly. With all of the advances in large scale integration and of course the digital revolution, you can just put far more functions and capabilities in the same ten pound box today.”