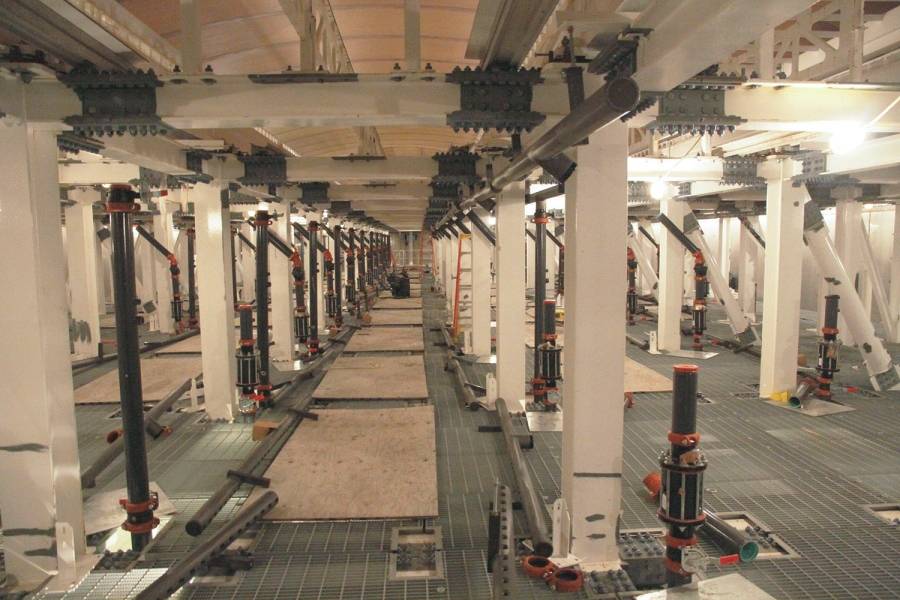 A million pounds of steel will anchor the radar array, which will allow the Air Force to monitor even subtle course changes for space junk. (Photo Credit: Wyatt Olson, Stars and Stripes)

Currently under construction on the remote island of Kwajalein, Space Fence is a radar system that will help the U.S. Air Force better track space junk. General Dynamics SATCOM Technologies is partnered with Lockheed Martin to build the ground structures for Space Fence, which includes the 7,000 square-foot radar receive array structure.

In an article in Stars and Stripes, Wyatt Olson reported on his experience walking inside the Space Fence radar array structure with Bruce Schafhauser, Lockheed Martin’s program director.

The site is composed of two pressurized radar chambers, one for transmitting into space and the other for receiving those radio frequencies. Roofs covering each chamber are made of thick, electronically transparent Kevlar.

Passing through air locks into the radar chambers is an ear-popping experience. At the chambers’ ground level is a crisscross of a million pounds of anchoring steel.

“What you’re looking at is a steel structure that’s very sturdy to not only maintain alignment of the radar array face, which is at the very top of this, but also because we have seismic requirements that we’re dealing with here,” Schafhauser said during the tour. “That accounts for the size of it all.”

Wide aluminum columns carry coolant, and 50,000 tons of concrete make up the thick foundation and walls.

The General Dynamics-built radar array is designed to withstand earthquakes, hurricane force winds, and extremes in temperature. Once operational, the 700,000 pound steel structure will be sensitive enough to locate and track objects the size of a softball hundreds of miles above the Earth. To read the full article on Space Fence’s construction, visit Stripes.com.

Space Fence is an advanced ground-based radar system that will enable the Air Force to better monitor over 200,000 objects orbiting the Earth. Space Fence will use a highly sensitive S-band radar to identify and track these objects, which will help prevent satellites and the International Space Station from colliding with debris. To learn more about the Space Fence program, click here.

VIDEO: Space Fence - Watching Over Us