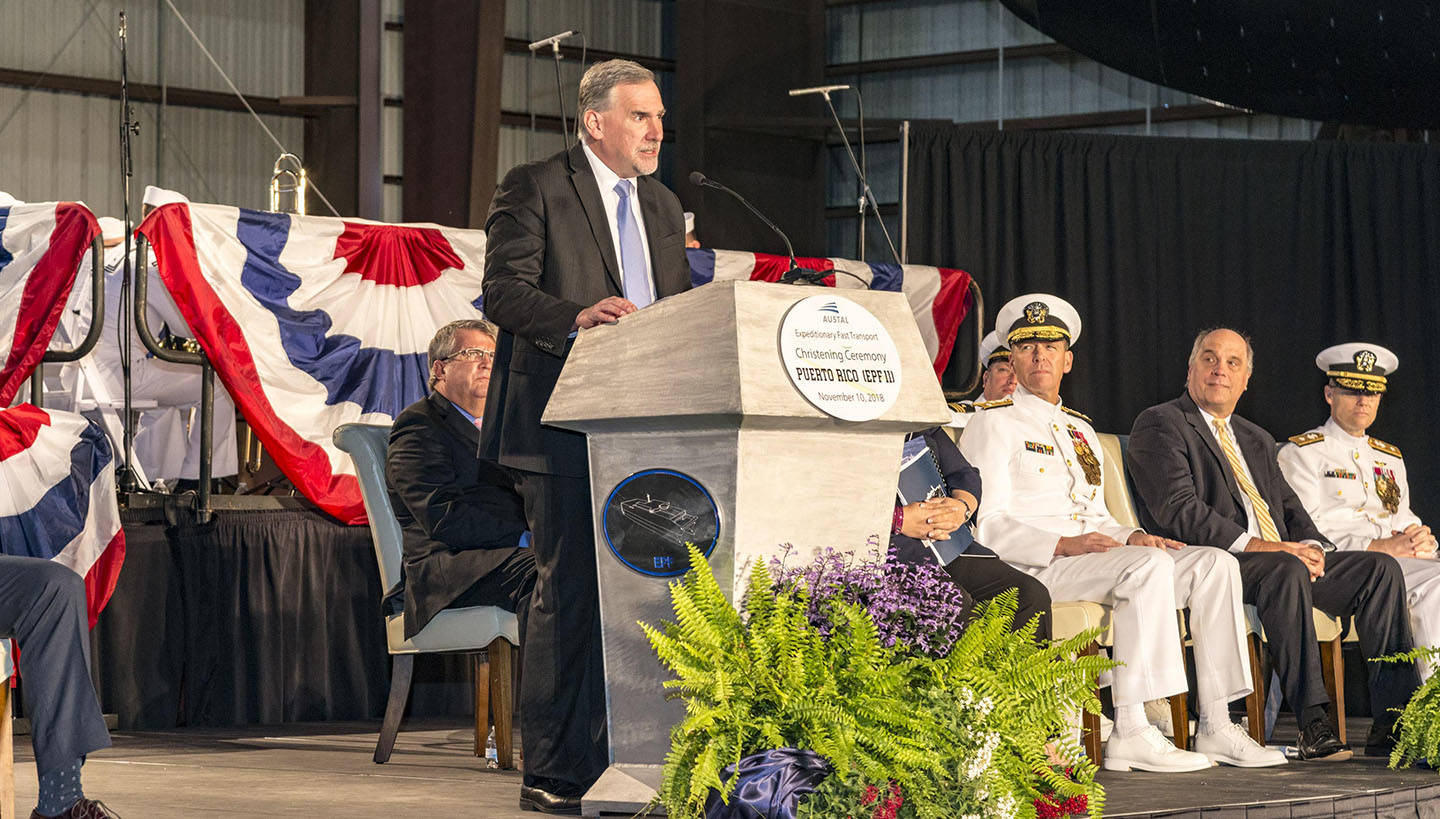 MOBILE, Ala. - Austal celebrated the christening of Expeditionary Fast Transport (EPF) the future USNS Puerto Rico (EPF 11) with a ceremony at its state-of-the-art shipbuilding facility this morning. Puerto Rico is the eleventh of 12 EPFs that Austal has under contract with the U.S. Navy with a combined value of over $1.9 billion.

“Austal is excited to christen another amazing ship,” said Austal USA President, Craig Perciavalle. “Puerto Rico is one step closer to joining her sister ships in supporting important missions across the globe.”

Nine Spearhead-class EPFs have been delivered and are serving as an affordable solution to fulfilling the Military Sealift Command’s requirements worldwide. The future USNS Burlington is scheduled for delivery to the Navy later this month and two more EPFs, including EPF 11, are under construction at Austal’s Mobile, Ala. shipyard. Austal also received instruction from the Navy to order long lead-time materials for EPF 13 in October.

“Congratulations to the incredible Navy – Industry team for achieving this important milestone,” continued Perciavalle. “You should be proud of the important service you’re providing our country.”

In addition to being in full rate production for the EPF program, Austal is also the Navy’s prime contractor for the Independence-variant of the Littoral Combat Ship (LCS) program. Austal has delivered nine LCS, while an additional six are in various stages of construction.

About General Dynamics Mission Systems
General Dynamics Mission Systems is the Expeditionary Fast Transport (EPF) vessel system integrator, using OPEN CI that allows the U.S. Navy to deliver mission capability when and wherever it’s needed, as well as streamlining the deployment of new and updated technology as it advances. The EPF vessels with their open architecture system provide adaptable and highly capable command & control, allowing the ship to transport troops and equipment through the spectrum of traditional logistics missions. The EPF’s ability to access small, minor and degraded ports with minimal external support provides unique options to fleet and combatant commanders for inter-theater lift, engagement, humanitarian assistance/ disaster relief missions, as well as special operations support.

About Austal USA
Austal USA is a subsidiary of Australian-based Austal Limited. Austal USA is headquartered in Mobile, Alabama with offices in San Diego, Washington, D.C., and Singapore. The company is positioned to support both commercial and government ship construction as well as worldwide post-delivery support and sustainment. Austal USA is under contract with the U.S. Navy to build two high-speed high performance ships, the Expeditionary Fast Transport (formerly known as the Joint High Speed Vessel) and the Independence-variant Littoral Combat Ship. As the newest shipyard in America servicing the US military and despite its short 19-year history, Austal USA has one of the best safety records in the industry and is the most advanced state-of-the-art ship manufacturing facility in the country.