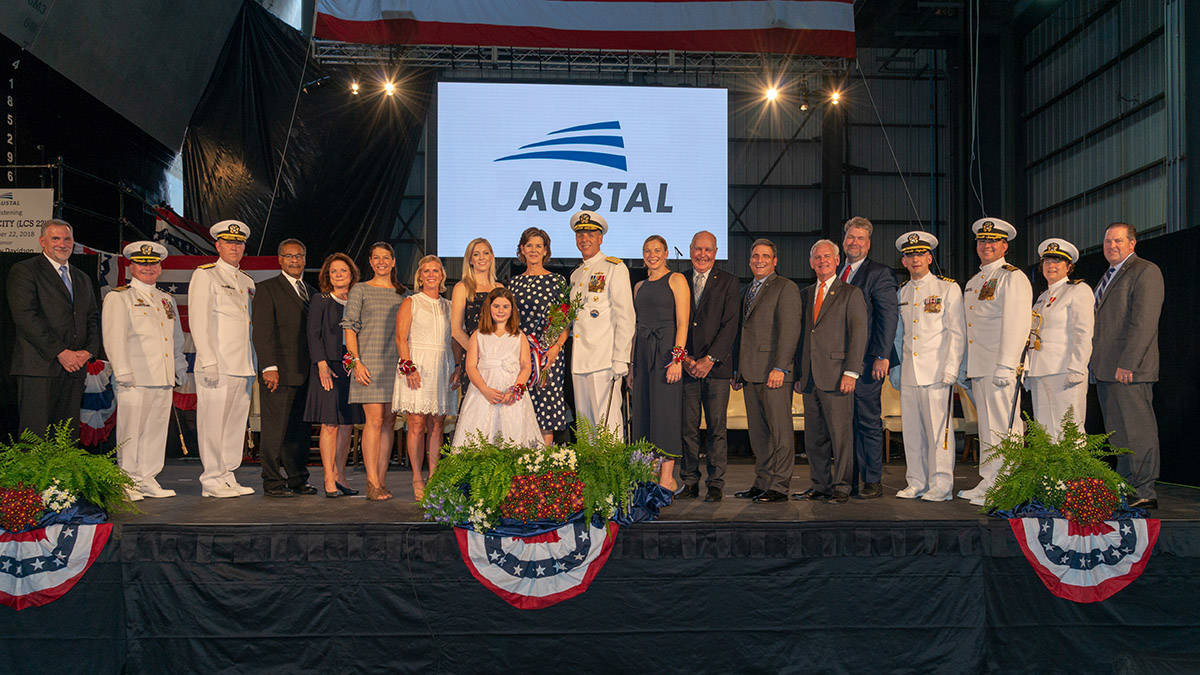 MOBILE, Ala. – Austal USA proudly hosted the christening of the nation’s 22nd Littoral Combat Ship (LCS), the future USS Kansas City, at its state-of-the-art ship manufacturing facility today. Kansas City is the eleventh of 17 Independence-variant LCS Austal USA has under contract with the U.S. Navy.

“Today marks a significant milestone with the christening of this amazing warship,” said Austal USA President Craig Perciavalle. “Our talented shipbuilding team is proud to provide our Navy with an extraordinarily capable vessel that will honor Kansas City as she becomes an integral part of the U.S. naval fleet protecting our nation.”

“We are honored to host Mrs. Davidson as the ship’s sponsor,” continued Perciavalle. “No one other than an Admiral’s wife, especially one so active in the Navy community, would be better suited for this important role to the ship and her crew.”

A native of Missouri with a degree from Southern Methodist University, Tracy is currently living in their 22nd house since marrying Admiral Davidson. She is an active Navy spouse who has volunteered with family readiness groups, been an Ombudsman, served on support group boards, and mentored the Command Leadership Class. Her recent positions include: the Advisor to the Tidewater Officer Spouses Association (TOSA), Tidewater Collection, Surface Officers Spouses (SOS), and Continuum of Resource Education (CORE), four military support organizations in Norfolk.

The Independence-variant Littoral Combat Ship is a high-speed, agile, shallow draft, focused-mission surface combatant designed to conduct Surface Warfare, Anti-Submarine Warfare, and Mine Countermeasures missions in the littoral region. With its open architecture design, the LCS can support modular weapons, sensor systems and a variety of manned and unmanned vehicles to capture and sustain littoral maritime supremacy.

Austal delivered Charleston (LCS 18) in the end of August, the third Independence-variant LCS delivered to the Navy this year. In addition to the future USS Kansas City, four more Independence-variant LCS are currently under construction, including Cincinnati (LCS 20), Oakland (LCS 24), Mobile (LCS 26) and Savannah (LCS 28) with construction on Canberra (LCS 30) scheduled to begin in early 2019. The future LCS 32 and 34 were awarded on September 18, 2018, and will begin pre-production activities.

In addition to being in full rate production for the LCS program, Austal is also the Navy’s prime contractor for the Expeditionary Fast Transport (EPF) program. Austal has delivered nine EPF, while an additional three are in various stages of construction.

Austal USA is a subsidiary of Australian-based Austal Limited. Austal USA is headquartered in Mobile, Ala. with offices in San Diego, Washington, D.C., and Singapore. The company is well positioned to support both commercial and government ship construction as well as post-delivery service and support worldwide. Austal USA is on contract with the U.S. Navy to build two high-speed advanced ship classes, the Expeditionary Fast Transport and the Independence-variant Littoral Combat Ship. Austal USA is not only the newest and most state-of-the-art shipyard in the U.S., but also one of the safest as the company has earned 11 safety awards in its short 18-year history.